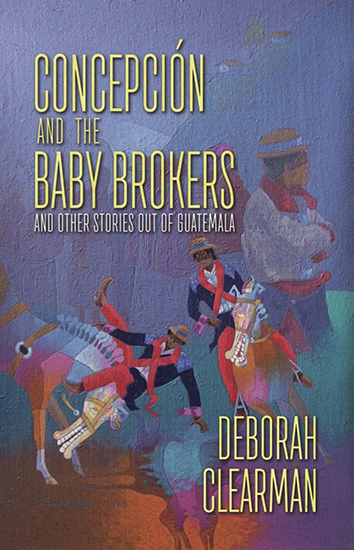 Concepción and the Baby Brokers

And Other Stories Out of Guatemala

In nine thematically linked stories set largely in Guatemala, Concepción And The Baby Brokers brings to life characters struggling with universal emotions and dilemmas in a place unfamiliar to most Americans. From the close-knit community of Todos Santos to the teeming danger of Guatemala City, to a meat-packing plant in Michigan and the gardens of Washington DC, Deborah Clearman shows us the human cost of international adoption, drug trafficking, and immigration.

A Cup of Tears, the opening novella, reveals a third-world baby farm, seen through the eyes of a desperate wet nurse, a baby broker, and an American adoptive mother. In “The Race” a young man returns to his native village to ride in a disastrous horse race. “English Lessons” tells of a Guatemalan immigrant in Washington DC who learns more than English from a public library volunteer. A teenage girl tries to trap her professor into marriage in “Saints and Sinners.”

With searing humanity, Clearman exposes the consequences of American exceptionalism, and the daily magic and peril that inform and shape ordinary lives.

A collection of stories about hard choices borne of desperation and the stark delineations between classes in both Guatemala and the United States…. Clearman offers the same photographic eye and acute vision of Guatemalan culture throughout…. stories of strength and ethical quandary.
—Kirkus
In these vivid and often heart-wrenching stories, Deborah Clearman illuminates Guatemalan culture at ground level, through characters whose struggles are palpable and moving. The collection couldn’t be more timely, or necessary.
—Julie Salamon, bestselling author of Wendy and the Lost Boys
With deep respect for Guatemalan culture, particularly its variations in the beautiful, haunted town of Todos Santos, Deborah Clearman gives us these lovely, captivating stories out of Guatemala. Hers is a voice worth hearing; these are stories worth reading.
—Mark Brazaitis, Julia & Rodrigo and The River of Lost Voices: Stories from Guatemala

What first drew you to Guatemala?

Since my first trip to Guatemala in 1978, I’ve loved the country for its spectacular landscape, its friendly people, and its strong connection to its pre-colonial past. I lived there for a year while I was writing my first novel, Todos Santos, which was written from the perspective of an American mother and son. In the decade that followed, in my yearly extended visits, I began to feel I could speak in the voices of the Guatemalans I’ve grown to know so well. I wanted to tell their stories from the inside as much as possible. I have also watched the town of Todos Santos develop from a traditional third-world rural outpost into a twenty-first century globally connected regional center. There have been winners and losers in this transition, and you meet some of them in my stories.

What inspired the title story?

When I first arrived to live in Todos Santos in 2001, I kept hearing stories about foreign baby-snatchers—people who would steal babies and sell their organs or use them in satanic rites. I shrugged these rumors off attributing them to ignorant and superstitious third-world peasants. However, I investigated and discovered how wrong I was. Babies were being stolen and sold, not for their organs but for adoption by families in the United States. There was a huge baby black market. Judges were paid off, lawyers were complicit, young women were paid to get pregnant and sell their babies, and the authorities in both Guatemala and the US were very little help. By 2007 one out of every 100 babies born in Guatemala was adopted by an American. Some of them were really orphans or were given up legally by their mothers. Many were not. Finally the government of Guatemala acted and banned foreign adoptions. But the problem persists in poor countries around the world. Adoptions by people between countries of vastly different wealth are an invitation for corruption.

Do you think the book’s opening novella offers a balanced view of international adoption?

How did the process of writing Concepción and the Baby Brokers, a book comprised of a novella and short stories, differ from writing your novel Todos Santos?

At first I wasn’t writing a book. The stories just came out naturally from my continued involvement with Guatemala. I heard so many stories there and I needed to write them. After a while the characters started to flow from story to story. They went where the people I knew went; they followed my passions. Finally I realized I had never written about the large school in the middle of town, where most of my friends in Todos Santos worked. Both elementary and middle school, it was the social and cultural center of the town. In “Saints and Sinners” quite a few earlier characters reappear and stories are reprised. When I finished it, I knew I had finished the book.

How do you think this book will be received in Guatemala?

Since the book is in English it will mostly be read by foreigners either visiting or living in Guatemala. There are a number of bookstores throughout the country that sell books in English to tourists and travelers, and my novel has done well there. Even Americans living in Guatemala and working for various government or charitable organizations tend to be cut off from actual Guatemalans. I would hope this book would help them see a little more into the lives of the people they’re trying to help.

Given current headlines on immigration, do you think that your book is now more relevant than ever and will interest more readers?

Immigration is very much on people’s minds, both those who oppose it and those who think it’s what makes America great. Yet the average American knows next to nothing about Guatemala. One reader of my novel Todos Santos wrote of his preconceptions, “a country with beautiful beaches, widespread poverty, recent political violence, and little hope that things will get better.”

Actions by and interactions with the United States and its people have affected Guatemala throughout its history. From the CIA sponsored coup in 1954 that overthrew Guatemala’s first democratically elected government, through US support of the genocide in the ’80s that killed over 200,000 Guatemalans, to American demand for illegal drugs (despite the ineffectual War on Drugs) that has created a narco-state in Guatemala, the United States wields tremendous power and influence over the lives of Guatemalans. The disparity of wealth between Guatemala and the US has created an almost irresistible lure for migrants in search of better paying jobs; an estimated 1.1 million Latinos of Guatemalan origin lived in the US by 2010, this from a country of 15 million people. In addition, rising violence caused by the gangs that originated in US prisons and were exported to Guatemala through deportation has created recent waves of refugees.

I hope that by bringing my Guatemalan characters alive for American readers I can help replace ignorance and preconceptions with empathy. That said, while I support a path to citizenship for the millions of law-abiding immigrants who are already here, I never encourage Guatemalans to come. When I’m in Guatemala I tell my friends to stay and build their own country. Many of them are.

Do you think it’s necessary to live in a place to write about it?

It is for me. I can’t speak for other writers.

Are the characters based on people you have known in Guatemala over the years? Are some characters purely fictional?

Yes and yes. People who know my Guatemalan friends have already started asking me, did the school principal really have an affair with his student? The answer is no. Did a bus really tumble ninety meters down a mountainside with no fatalities? The answer is yes, but the rest of the story is fiction. I don’t know anyone whose baby was stolen, and I’m glad of that, but I know people who were killed, or nearly killed in ways described in my stories.

Do you think there’s an inherent contradiction for a white writer from a first world country (U.S.) writing about a third world country? What are the advantages and disadvantages of your perspective?

I think there’s an inherent danger when appropriating another culture—of misunderstanding, of making arrogant assumptions (like my assumption about the rumors of baby-snatchers), of condescending (perhaps unconsciously), preaching, romanticizing, exploiting, the list goes on. I relied very much on my Guatemalan friends to interpret their culture for me. Fortunately I had friends who were fascinated by the project, who loved bringing me stories, explaining why people did what they did, delving into backstory, re-living history. The advantage I had was that I was quiet and I liked to listen and ask questions.