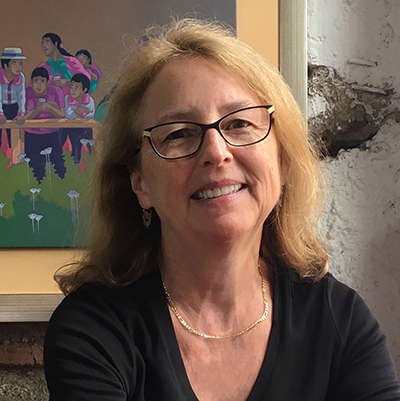 Downloadable photo
Deborah Clearman is the author of Remedios (New Meridian Arts Literary Press, 2020), Concepción and the Baby Brokers and Other Stories Out of Guatemala (Rain Mountain Press, 2017), and Todos Santos (Black Lawrence Press, 2010). Her short fiction has appeared in numerous literary journals. She wrote and illustrated The Goose’s Tale for children.

Deborah was born in North Carolina and grew up on a tobacco farm in Southern Maryland. She studied art history and fine arts at Bryn Mawr College and pursued a career in painting. Represented by First Street Gallery in New York City, her paintings and prints have been widely exhibited in galleries and museums.

Since her first visit to Guatemala in 1978, Deborah has been back many times, living for a year in the village of Todos Santos in 2001-2002. She continues to maintain a close connection to the country and her Guatemalan friends to this day.

For eight years Deborah was Program Director for NY Writers Coalition, a nonprofit organization that offers free writing workshops to underserved communities throughout New York City. Deborah has led creative writing workshops in such nontraditional venues as senior centers, public housing projects, adult basic education programs, and prisons. Since 2011 she has led ongoing weekly writing workshops for women and men in jail on Rikers Island. A member of PEN, she serves on its Prison Writing Committee. A mother of two grown children, she lives in New York City and Guatemala.

In 2014, fellow writer Ed Davis interviewed me about my writing process. Ed’s rollicking fiction evokes much of what I love about the folkways of rural Appalachia and small-town America. Sense of place is important to me. When I wrote the answers to his questions, I was sitting at my mother’s place at the kitchen table, looking out the window at my parents’ 360 acre farm in West Virginia, surrounded by green pastures, lowing cattle, rolling hills and mountains. It was a particularly poignant moment because my parents had just completed their journey to the great beyond.

What are you currently working on?

Right now I’m in the midst of a novel set in Guatemala, my third home. I recently completed a collection of linked short stories called Concepción And The Baby Brokers, which follows the trajectory of the highland Mayan village of Todos Santos over a decade of tumultuous changes, seen largely through the eyes of local characters. To write my first novel, Todos Santos—the story of an American woman and her teenage son having adventures and misadventures in Guatemala—I lived in said village for a year and have continued to go back ever since. I’ve heard so many stories and seen so many lives unfolding dramatically before my eyes that I felt I could speak in the voices of the Todosanteros I’ve come to love. The stories of Concepción And The Baby Brokers seemed (in retrospect!) to pour out as I thought about people I knew and issues I cared passionately about. When I’d written the last of those stories and knew intuitively I was done, I asked myself, is there anything I haven’t written about yet in Guatemala? There was: middle-class life in a provincial capital and how it is devastated by the drug trade.

How does your work differ from others of its genre?

All literature tells the same stories: a stranger comes to town, lovers betray each other, sons disappoint their fathers, and so on. Having grown up on a farm and spent my adult life in cities, mostly New York, I’ve always felt like an outsider. I went to Guatemala in the wake of a shattering divorce to reinvent myself in a place where I was truly an outsider. I went not as a tourist or Peace Corps volunteer or aid worker—I had no agenda other than to observe. I was innocuous, and people welcomed me into their homes and their lives without suspicion. I felt like an anthropologist, except that instead of writing social science, I write fiction. It thrills me to ask, why do people do the things they do? Often the answer is the same no matter where you are. By going to a place that few Americans know much about I hope to enlarge my readers’ world. However, I also write stories set in New York, and who knows, West Virginia might be next.

Why do you write what you do?

I write to connect with emotions—my characters’ and my own. I empathize with my characters, even when they do terrible things. For a long time I wanted to write about foreign adoption in Guatemala. It was a fraught situation, in which the urgent need in rich countries for babies to adopt, fueled by people who would DO ANYTHING for a baby, which has turned poorer countries into baby farms, where babies are stolen, bought and sold on the black market, and women are paid to bear children for the adoption market. When I tired to tell this story from the point of view of the victims—the mother whose baby was stolen, the child who grows up in America only to discover his Guatemalan mother is still mourning him—I found myself on a soapbox, preaching. Only when I realized I could tell the story from the point of view of the perpetrators—the girl who steals the baby, the contractor who buys him, the crooked lawyer who runs an adoption agency—could I explore the full human tragedy of the situation. The story became a novella, included in Concepción And The Baby Brokers.

How does your process work?

Ideas may percolate for months or years before they find a form. Other times, a story might come unexpectedly from a writing prompt—a first line like, “Gassing the woodchucks didn’t turn out right,” or, “Have some beef bouillon; it will warm you up.” For years I’ve participated in writing workshops, both as a member and a workshop leader, in which the group writes together to a variety of writing prompts, not just first lines but objects, images, sounds, anything the leader can dream up. We write and those who want to can read out loud what they’ve just written. The group tells the writer what they liked in the writing, what stood out. There is no criticism because it’s too soon in the writing process. This is a wonderful way for things to pop into your writing from the subconscious, inspired by the prompts and by the writing in the group. I always have a spiral notebook going, in which I can record interesting observations and dramatic moments. And of course, I spend many hours chained to the computer, slogging away with little hope that the story will survive. Some do; some don’t. I like to go for a run at the end of a day of writing. Running outside, along the Hudson River Park or on a country road, increases the flow of blood to my brain and often untwists knotty problems in my writing. Solutions spring to mind; ideas blossom like mushrooms on cow pies after a summer rain.